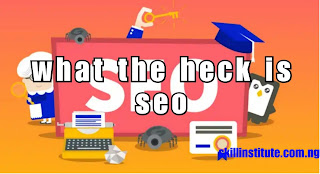 what the heck is seo and how does it works

When I started out on blogging; I always see most of my fb friends using the word, seo, seo is bae, the key to successful blogging career, bla,bla and bla

Most shocking of all was that ladies can Also do seo and show on google without the help of anyone, but I though they do pay to stay in top position on google
But I was wrong

So, I would be showing you everything I have known about seo so far since my blogging career, which means you would have to get your eyes fixed while reading so you don’t end up mixing words for words

What is seo and how does it works

Full meaning of seo simply means : search engine optimization; that is before one has the chance to show up on google he/she has to set his or her blog/website

As you continue to read, I would try my possible best to show you how you can start out and do seo yourself without  going through much challenges .

Having done your blog seo you can start promoting products or services over to the people who are interested in getting it; which means with seo, your customers ( people interested ) in the information, product or services you have would be the one coming in themselves even while you sleep

Is seo important
Seo is very much important and there are lots of people out there who really need it, example: you might write without knowing seo and at the end you would only be the person reading your content alone .

But with the presence of seo, there would be tons and tons of people rending what we have written even while not being active, and we don’t need to share over social media daily since the content would get over to it right reader as far as seo is concern

The good news is that you  only have to do each work when writing, not what many others think

What is the charge of seo

Great question, charges being given all depends on who is actually going to work on a site seo

Seo agency : helping bring a site to a great stand and making a site get it potential is all they care about though there charges might be too high for most people to pay but it worth there work

There charges are around $500 to thousand of dollars

There are different types of seo; the good, the bad and the dangerous

White hat seo is known to be mostly applied to by sites tending to go on a long term, which makes one need to follow google rules surrounding seo

Grey hat seo: this falls between the white hat and black hat seo techniques; though many still believe that any doing such is simply still doing black hat seo

Black hat seo: this is a technique being used in other to rank on google faster by cloaking text and building massive links

This is very bad to go after, it can be penalized by google once there update catch up with it

Most dangerous part of this is that it could drop down a whole year work in just a single day when google update hit such site .

Negative seo: this is being implemented on site by another competitor. In a way to bring down a site from it position on google for them to rank higher

Is seo a dying industry ?

As far as seo is concern, seo would never die though people are avoiding seo but prefer to pay for google ads which send them traffic as long as they keep there ads running but it is more better to spend less and continue getting traffic to a site for free

Which of it would you go for  if you were to choose ?
Free traffic or paid traffic

This is a short tutorial on how to do seo for a website step by step .

Simply try ranking where low sites are taking position up on google; that way there is more chance that you would show up on google in a very short time

Always optimize your content to fit in while writing and also avoid stuffing your keywords .

Try writing more content that most of your competitors showing up on google; with that you would crack the first page easily with little or no effort from you

Conclusion: seo take continues work and study to understand better on what it takes and what steps to take to get the best